Even though Germans have invaded Poland about a year ago in 1939 and then Denmark and Norway in 1940, the French and the English chose not to attack. They waited for Germans to come across their defense lines and dissolve since they believed Germany lacked the militaristic and economic finesse and power to mirror their advance into Belgium and France as they did back in 1914.

The Germans were aware that the numbers were stacked against them and therefore a war of attrition would not be successful. Instead, they came up with a strategy that involved sudden and forceful attack. Their plan was to drive a panzer division through the heavily wooded hills of the Ardennes. This would ultimately split the French forces and they could crush the French and the Belgian forces at the same time. 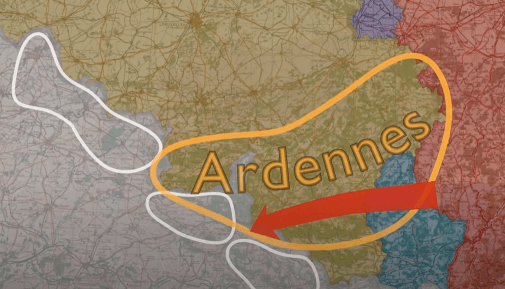 For the Belgian High Command the Ardennes was not a major defensive factor. They believed that an armored thrust through this region was simply impossible as the tanks could not go through the forest. They had to stick to the main roads which would put them in a vulnerable position. This factor coupled with some budgetary cuts to the Belgian army which prevented them to become as motorized as they would have liked meant that they focused their forces on the northwest and to the south of that region and wait for the Allied forces to come to their aid. 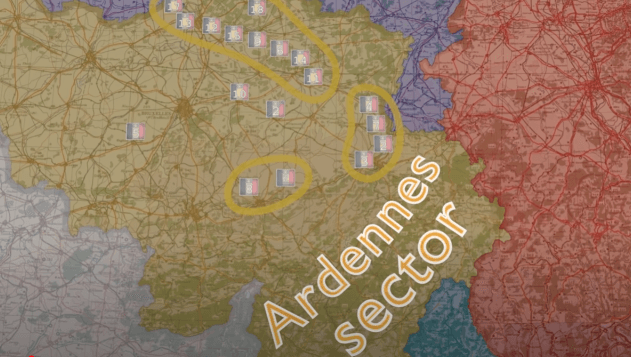 The Ardennes region had only 2 regiments and one of them was a unit specialized to fight in the heavily wooded forests called Chasseurs Ardennais. They were only there to provide a tripwire defense since they were infantry and lacked the firepower to stop armored divisions. They were not supposed to directly engage with the enemy but instead were tasked with demolishing bridges and roads and ultimately receive the command to withdraw northwest where the bulk of the Belgian forces were to join them.

Unknown to the Belgian High Command, their "not engaging with the enemy" plan played into the hands of the Germans as they needed the element of surprise and speed. Any delay would mean the Belgians and the French would realize that the main attack was through the Ardennes and bring reinforcements.

On May 10 1940, the Germans crossed the Luxembourg border and sped across the region as their success depended on executing their plan almost to the minute.

When they came across where the Chasseurs Ardennais is positioned, they saw that the bridges were already destroyed and there were various obstacles aimed at delaying the German tanks. Instead of the tanks, the German motorcycle units attacked and broke through the lines easily. Their next target was a village called Bodange.

The German motorcycle units tried the same tactic thinking that they would break through the lines with ease just as before but this time the Belgian light infantry resisted and fought back. As more and more Germans came to fight, the commander of the Chasseurs Ardennais called headquarters to ask for orders. They needed to withdraw but he could not do so without orders. But there was no response from the headquarters as the line was dead.

Meanwhile, on the other end, Belgium headquarters were repeatedly sending them orders to disengage and withdraw immediately. These orders never reached the small group of men fighting.

The lines were cut by the German paratroopers earlier that day.

There was nothing to do for the Chasseurs Ardennais, but to hold on to their last order. Their motto was Resiste et mords, or Resist and Bite and that's what they did against all odds.

Ultimately the Germans realized that they could not take over these positions by infantry attack alone so they frantically tried to repair the roads and the bridges as this delay was messing with their timeline. They brought in artillery but the Belgians dug in.

Finally only the mighty 88mm artillery managed to get the best of the Belgians and their defenses crumbled. Then the bitter house to house fighting began. It took over 6 hours for the Germans to finally overcome the Belgians.

This heroic resistance by the Chasseurs Ardennais was not planned nor was it requested by the High Command. It only took place due to communication failure.

Not all communication failures result in such heroic stories. Generally it has the opposite effect.

Documenting the changes and the thought process whether it was a success or not eliminates some of the communication problems the organizations face.

Humans, more often than not, depend on memory. Unfortunately memory is not very reliable and counting on it in a team environment or in an improvement project can be catastrophic. Even if we, personally, have a good memory, we would require the whole team and everybody else involved in the project to have the same level of reliable memory for years to come. This simply is not possible.

According to a 2014 study from Women's College Hospital, 50% of quality improvement projects fail to improve quality due to mostly reinventing the wheel rather than building on the past learning*. Documenting improvement projects allows us to pass on the knowledge and experience. By documenting our efforts, the collected data and analysis, we make sure that we can build on previous knowledge and not waste time and effort by going through the same exercises over and over again.

A big part of improvement projects is predicting the outcome of the change. Comparing predictions to results is a key source of learning**. This allows us to build organizational knowledge and memory.

Without documenting our predictions we risk having Hindsight Bias**, also known as the knew-it-all-along cognitive bias. This is the common tendency for people to perceive past events as having been more predictable than they actually were. Hindsight bias can make us believe we knew what the result would be at the time even if we didn't. To make matters worse, our mind starts making up "facts" as the time passes and fill in the gaps with other biases, beliefs and prejudices. Documenting predictions and improvement projects prevents this cognitive distortion as well as helping with the communication. Anyone who has played Chinese Whispers would know what I am talking about.

Improvement projects are complicated undertakings requiring many moving parts. People with diverse backgrounds, wide range of data and their accompanying analyses, planning the improvement and recording the results require the improvement professionals to use various tools available to them. The documents generated by these tools are not always compatible with each other and even if they were compatible, these files are stored on some network or cloud drive and they are ultimately forgotten. It would require one to comb through seemingly endless folders and files before starting an improvement project to see if a similar project has been done before and what the experience was like. One can imagine how often that happens.

Alternatively, some teams use project management software but since they are not built specifically for improvements, the experience becomes a mess and results in even more additional external tools being used. Then all the of the issues described previously creep in.

There is a need for an enterprise improvement system to guide the team through their improvement projects as well as document their progress. In such a system, the sponsors would only look at the information they need, the team members collaborate and view the execution plan of the project anytime. Such a system helps with the teams, managers and the improvement professionals to be on the same page. The overall communication improves resulting in a higher chance of success and organizational knowledge and memory expands.

Such an enterprise improvement system exists today called Aimi. A quick screenshot of the charter screen for an improvement project below shows how Aimi builds knowledge as it is used by various organizations around the world:

Not all communication failures result in heroic actions as the one described above. There is no need to take a chance with your improvement projects and ultimately the organization.